Coriander leaves (cilantro in North America) come from an annual herb called Coriandrum sativum. All parts of the plant, including the roots are edible although the fresh leaves (cilantro) and seeds are more frequently used. The herb is indigenous to South Europe and Mediterranean region

The leaves have a pungent fragrance which seems to be either hated or loved by different people . I started eating coriander before I could walk or speak, so I’ve known it all my life and I really love it.

What are coriander leaves used for?

Coriander leaves are best used raw or added at the end of cooking because heat diminishes their flavour and fragrance. 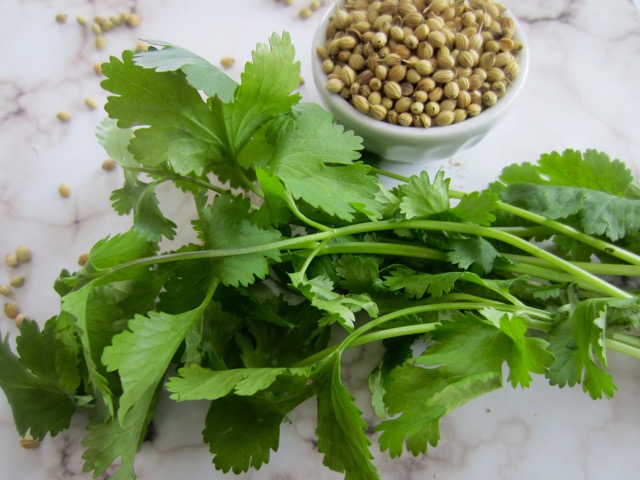 Fresh coriander leaves are a key ingredient in Mexcan, SE Asian, Chinese, Latin American,  and African cuisine. Both the leaves (cilantro) and seeds are used extensively in India for cooking, flavouring and garnishing foods.

The leaves can be used to flavour and garnish fish, seafood, meat, poultry,  salads, soups and stews.

Coriander leaves are not  used in extensively in Europe or Japan, except in Portugal.

Coriander roots have a more intense flavour than the leaves and are used in many Asian cuisines especially in Thai cuisine to make curry pastes.

What is the Nutritional Value of Coriander Leaf (Cilantro)?

Fresh Coriander Leaves contain 95% water but is very rich in vitamin K and has a good amount of vitamin A and C.