Poblano pepper  is a cultivar of sweet pepper of the species Capsicum annuum. It looks like a small bell pepper that tapers at the apex to a thin point. It’s one of the most popular peppers grown in Mexico, in the in the state of Puebla.

Poblano is a mild chili pepper. Once dried, it is called ancho or ancho chile, from the Mexican Spanish name ancho (“wide”) or chile ancho (“wide chile”).

Dried anchos are flat, wrinkled, and heart shaped, ranging in colour from oxblood to almost black. Anchos are mild to moderately hot and are often soaked and ground for use in cooked sauces.

While poblanos tend to have a mild flavour, occasionally and unpredictably, they can have significant heat. Different peppers from the same plant have been reported to vary substantially in heat intensity.

The ripened red poblano is significantly hotter and more flavourful than the less ripe, green poblano.

Poblanos are usually roasted and peeled before using, either in casseroles, soups, and sauces or stuffed with meat or cheese to make chiles rellenos. 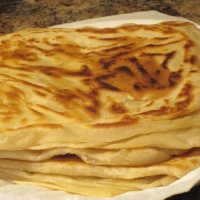