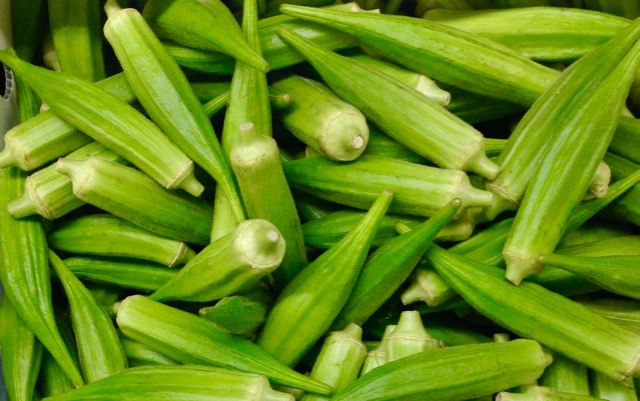 Okra is commonly known as Lady’s finger, Common okra, Okro, Gombo or Gumbo, Bindi Its origin is uncertain but it’s widespread in tropical, subtropical and warm temperate regions and is particularly popular in West Africa, Middle East, Caribbean, India, Phillipines, Thailand and Brazil. In the USA, Florida, Georgia and Texas are the leading producers.
The species grown in West Africa is called Abelmoschus caillei and is popularly known as West African Okra. More than 6 million tonnes of okra are produced a year.

Part of the Plant Used

The okra plant is a stout annual, erect herb, up to 4m tall with a well branched, stem covered with stiff hairs.

All the edible plant parts are mucilaginous, resulting in the characteristic “goo” or slime when they are cooked. (All young parts of the plant are said to be edible.)

The plant is mainly grown for its young immature fruits (pods) that are popular as a cooked or fried vegetable. Cooked okra exudes a gooey and slimy juice due to the presences of mucilage.  Okra  is a key ingredient in the thick piquant soup called gumbo and is popularly used in soups and stews.

Okra’s flavour and texture are unique. It’s tastes is somewhere between that of eggplant and asparagus and it especially marries well with tomatoes, peppers and corn.

Okra is available in varying shades of green or white and in chunky or slender shapes with either ribbed or smooth surface. Varieties with ribbed pods are the most common.

Culinary Use of Okra

How to minimize the sliminess of okra

Okra became a popular vegetable in Japanese cuisine toward the end of the 19th century, served with soy sauce and katsuobushi as tempura and more recently as a nigiri sushi topping.