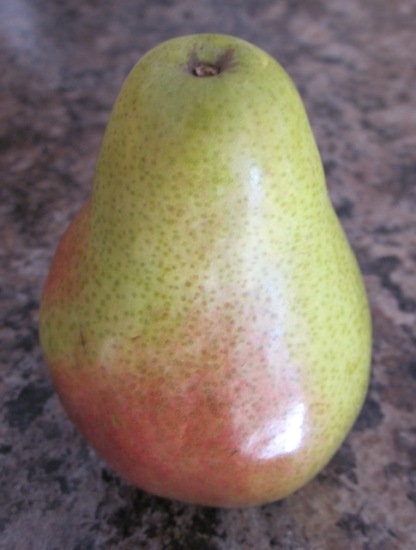 Anjou pear is commonly referred to by it’s French name, d’Anjou. It is the most abundant cultivar of European pear (Pyrus communis) and the least expensive too.

Anjou’s taste is quite bland compared to other pears, with a subtle hint of refreshing lemon-lime and hint of grittiness.

The Red Anjou originated as naturally occurring bud sport found on Green Anjou trees. Apart from the reddish-maroon skin colour, red Anjou pears are very similar to the Green Anjou, in shape, flavour and texture. They are great for adding colour to a fruit basket, bowl or salad.

What is a bud sport?

The word sport in botany, means a natural genetic mutation as a result of faulty chromosomal replication. The sport results in a segment of the plant that is distinctly different from the parent plant in appearance (phenotype) and genetics (genotype)
A bud sport is the natural mutation that occurs in a single branch in a tree. In many cases the new character (trait) can be handed down to the plant’s offspring.
Many varieties of fruits are ‘sports’ such as the ‘Red D’Anjou’ which is derived from the ‘Green D’Anjou’ where the difference is only in the skin colour.