Black peppercorns are the dried black berries (fruits) of the woody vine (Piper nigrum), which is a native of southern India. They are harvested while still green and unripe and then dried. During drying, the green berries turn black and wrinkly.

Black pepper (Piper nigrum) is the world’s most traded spice. It’s also the most used spice in western kitchens, after salt. Its spiciness is due to the chemical piperine and pungency due to volatile oils. 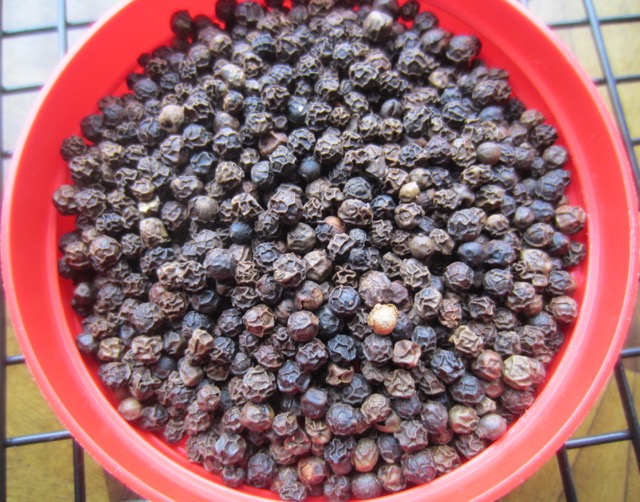 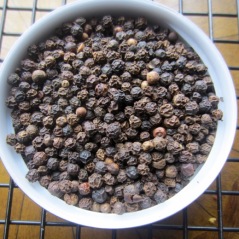 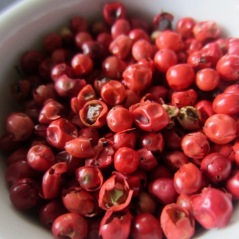 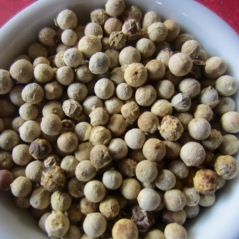 White Peppercorns myfavouritepastime.com
The pink peppercorns belong to the species Schinus molle (Family Anacardiaceae-Mango family). It’s known as Californian pepper tree or Peruvian pepper tree.
Black Peppercorns
Black peppercorns are the fruits (botanically known as a drupe) of the Piper nigrum vine. A drupe is a fleshy fruit with a single seed. Examples of drupes are mango, plum, apricot.

Black peppercorns are picked when mature but still green, then dried.

They become black and wrinkled after drying and are called Black Peppercorns.

When the black peppercorns are stripped of their black coat they become white peppercorns, which are actually seeds, like the single stone found inside the plum or apricot.

The pepper seeds are a source of ‘oil of pepper’ and oleoresin, used in flavouring sausages, canned food and drinks. The oils have a pepper aroma and flavour, but lack the pungency. The pungency of pepper is due to the active principles in the volatile oils, piperine and resin. (The Penguin Companion to Food)

Pepper increases the flow of saliva and gastric juices, thereby improving the appetite. If consumed in sufficient quantities it will have a cooling effect. (The Penguin Companion to Food