Parsnip was eaten as a source of starch for four thousand years when they were the nutritious and ubiquitous staple until the19th century when potatoes replaced them and their popularity drastically declined.

There are several American cultivars but the most popular has broad shoulders, white flesh and a tender core.

The part used is the fleshy taproot. It’s pale yellow, cream or ivory coloured and can grow up to 3m in length if left in the ground for too long. It’s usually harvested after the first year because the tubers become inedible if left for too long.

Harvesting is done in autumn (fall) and winter because the flavour improves when the root is left in the frost.

What is the flavour of parsnip?

Parsnip has a mild celery like fragrance and a sweet nutty flavour. Parsnips have a sweeter taste than carrot, when cooked. Their flavour is best in winter when they are most abundant.

Toxicity of Shoot and Leaves

While the root of the parsnip is edible, handling the shoots and leaves of the plant requires caution because they contain a toxic sap. The leaves contain faranocoumarins which may cause severe irritation with skin contact.

Parsnip is an erect biennial herb up to 2m high, with hollow and furrowed stems.

The leaves are large, pinnately compound and arranged in a rosette.

The flowers are small, yellow and arranged in umbels.

The seeds are pale brown, flat, and winged.

The root, is a fleshy, pale yellow to cream, tuberous taproot.

They are planted in spring and take 3-4 months to mature. They are purposely left in the ground until a hard frost occurs in fall (autumn). The frost initiates conversion of starches in the vegetable to sugars giving them their pleasantly sweet flavour.

Some growers leave parsnips in the ground over winter rather than picking and storing and them. They believe parsnips dug up the following spring are the sweetest.

Commercial growers harvest parsnips in late fall and place them in cold storage, at around 0-1°C (32-34°F) for at least 2 weeks to allow the conversion of starch to sugars. These parsnips are just as sweet as those left in the ground for two months.

Culinary Use of Parsnip

This neglected hardy root vegetable is easy to prepare and is a good substitute for potatoes as a side dish. It’s also an excellent addition to soups and stews.
Parsnips are a root vegetable like turnip or carrots, so they can be boiled, fried, baked, mashed or pureed. They give a rich flavour in casseroles, soups or stews, especially beef stew.

Roast parsnip is an essential part of Christmas dinner in some regions and it’s also frequent in the traditional Sunday roast. Parsnips can also be made into fries or crisps (North America chips).

Candied parsnip is a popular snack in N. America.

Parsnip is made into wine tasting similar to Madeira.

Parsnip is not a major commercial crop and is available all year round. Supply is lowest in the summer months. Major producers in the USA are Northern California followed by Michigan. 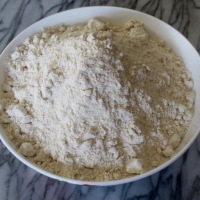