The globe artichoke (Cynara scolymus L.) is a perennial herb cultivated in the Mediterranean region and the Americas for its edible immature flower heads (inflorescences). It belongs to the sunflower family, Compositae (Asteraceae). It’s also known as French artichoke or Green artichoke or Carciofi (Italian).

The French, Italians and Spanish are the leading growers and consumers of artichokes. 99% of the crop grown in the US is grown in California.

What is an artichoke? 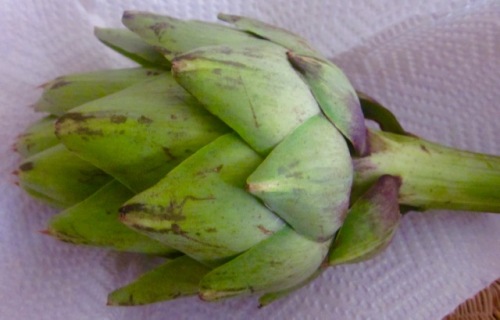 It’s a green, cone shaped, immature flower head or unopened flower head with several overlapping, green outer leaves, that are tough and inedible at the tip, but fleshy and tender at the base, and edible. The so-called ‘leaves’ are botanically known as bracts.

The shape of the artichoke head varies from spherical, to oval-shaped to cylindrical. Spherical or oval shaped are preferred.

A cross section of the artichoke head

The middle of the artichoke head has a mass of immature florets referred to as the choke, thistle or beard. These immature florets are inedible and must be removed. (see the part marked with a red dot)

Surrounding the immature florets are a light coloured cone of immature leaves which are edible (see the part marked green).

When the artichoke head is still very small and immature, it can be eaten whole, after trimming. At this stage it’s referred to as ‘baby artichoke’. The baby artichokes are commercially sold canned, as “artichoke hearts’.

If the immature flower head of the artichoke is left to mature, then the flowers finally open and blossom with a lovely purple colour as shown below.

There are probably fifty different artichoke varieties grown in the warm temperate climates worldwide, but only the green Globe, an Italian type is cultivated commercially in the US. It grows up to 4 inches in diameter. Many European varieties have purplish or reddish leaves

What size is recommended?

Artichokes heads vary in size. The smaller ones are known as ‘baby artichokes’ and weigh about 60g (2oz). They are completely edible but must be trimmed. They are often marinated and served in salads or in hot or cold antipastos.

The largest heads weigh 500g (pound) or more and are best stuffed with a savoury filling after trimming the inedible parts.

The medium sized ones are recommended for eating with sauces as an appetizer.

Culinary Use of Artichoke

Artichoke is a delicacy, eaten bit by bit, by hand, and served hot or cold.

It can be served whole or trimmed down to the heart, which is the tastiest part. It’s usually served with liberal amounts of melted butter.

The artichoke head may be baked, sautéed, fried, braised, boiled, steamed, microwaved, grilled or stuffed and served hot with various sauces like hollandaise or melted butter or served cold with vinaigrette. It can be used in risotto, frittata, soup, lasagna, rustic sorta, gratin or in stews.

The smaller artichokes can be thinly sliced and eaten raw with lemon juice and olive oil.

In Italy, small immature artichoke heads are cooked and preserved in olive oil.

In Spain, the more tender, younger, and smaller baby artichokes are preferred.

More than 2/3 of the artichoke grown is consumed fresh and the rest is canned or frozen in the form or artichoke hearts (baby artichokes) or bottoms.

How to Buy Artichoke

Whatever the size or shape, an artichoke should be compact and heavy for its size with leaves or scales that are fleshy, thick, firm and tightly closed. They should not look dry and woody or spread apart (not compact). If you’re not sure about freshness squeeze the artichoke, you’ll hear a squeaky sound if the leaves are still plump and fresh.

Check the stem ends and if you see holes, these are signs of worm damage which might have also damaged the entire head.

Spring artichokes should be a soft green and those picked in fall or winter tend to be olive green with bronze tipped leaves, or slightly blistered, whitish outer surface (winter-kissed effect).

Artichokes can be bough in cans (packed in brine), jars (marinated baby artichokes in vinegar and olive oil) or frozen (ready to cook).

Source of information: (The Wellness Encyclopedia of Food and Nutrition).

How to Store artichoke

Artichokes are quite perishable so are best eaten immediately but you can store them in a plastic bag in the fridge crisper for 4-5 days. To keep it moist sprinkle a little water before storing.

Artichokes are harvested all the year round with peaks in the spring, from March to May and again, in October. 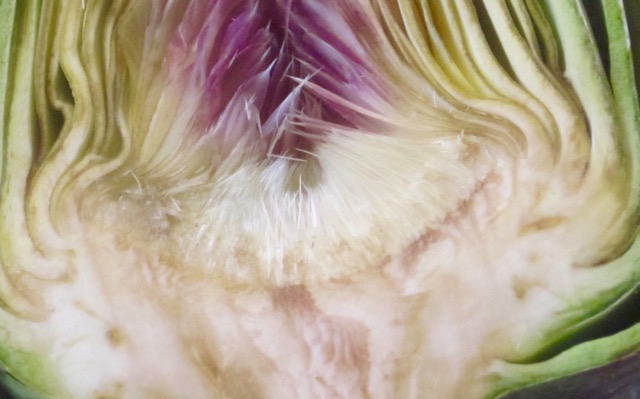