Pepper (Piper nigrum) is the world’s most traded spice. It’s also the most used spice in western kitchens, after salt. Its spiciness is due to the chemical piperine and pungency due to volatile oils.

The black, white and green peppercorns belong to the same species, Piper nigrum (Family Piperaceae) which is a woody vine native to southern India. 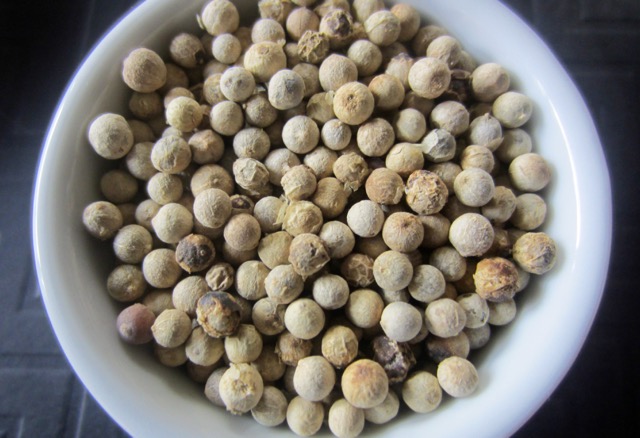 White peppercorns are the dried seeds of the piper nigrum vine. The fruits are allowed to mature and fully ripen, red, before they are picked from the vine. They are then soaked in water for a couple of days during which the fleshy part of the fruit softens and decomposes. The soggy flesh is cleaned off to leave the naked seed which is dried and sold as white peppercorns. The peppercorns can be sold whole, cracked or ground.

White pepper contains more piperine than black pepper but is less aromatic and has a weaker flavour. Ground white pepper is usually used in white dishes or sauces when the black specks of black pepper will spoil the look of the dish.

The pepper seeds are also a source of ‘oil of pepper’ and oleoresin, used in flavouring sausages, canned food and drunks. The oils have a pepper aroma and flavour, but lack the pungency. The pungency of pepper is due to the active principles in the volatile oils and piperine. (The Penguin Companion to Food)

Pepper increases the flow of saliva and gastric juices, thereby improving the appetite. If consumed in sufficient quantities it will have a cooling effect. (The Penguin Companion to Food)